Arthur F. Konopka is of counsel in the Real Estate and Trusts and Estates Practice Groups. Previously, Mr. Konopka was at the National Science Foundation and NASA. As part of the 50th anniversary of the landing of the Apollo mission, Mr. Konopka shared his experience of witnessing the mission’s launch. 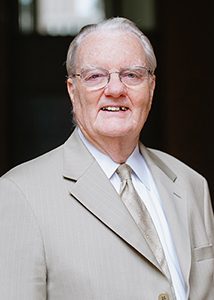 Prior to working in private sector law and the National Science Foundation, you worked at NASA. Can you briefly describe what you did for them?

My first job out of Columbia Law School in 1966 was with NASA. I was hired by the general counsel, in Washington, D.C. and I was ultimately detailed to the Canaveral Space Center, now known as the Kennedy Space Center. I began working in the counsel section, which worked on government contracts and procurements. The contracts that reached the counsel’s office were all quite large and complicated, and I learned a lot about the various NASA programs.

I was at Cape Canaveral, Florida at the time of the Apollo 204 fire, which took the lives of Roger Chaffee, Gus Grissom, and Ed White in January 1967. Shortly thereafter, I was moved back to Washington, D.C. into the Office of the General Counsel at NASA headquarters, primarily to work on the broad agency response to the disaster.

After that project, I provided legal input to all sorts of special projects for NASA. I was the youngest attorney in the office, single, lived walking distance of headquarters, was available for travel on a moment’s notice, and loved the challenge.

As the Apollo program wound down in 1971, a group of about 20 of us from NASA, me being the only attorney, moved to the National Science Foundation (NSF) to start and operate the Research Applied to National Needs program, which focused more on science application than on the traditional science mission of NSF. I also set up and managed the Law, Science and Technology program and I administered that program for 10 years. After working at the NSF, I opened my own law practice.

I understand you were present for the mission’s launch; what was that like? Can you describe what the atmosphere in the room was like?

I got agency spectator passes for myself and three friends to enter onto the Canaveral Space Center grounds and watch the launch from a major causeway that ran through the grounds. We were outside looking across the Banana River to the launch pad. I knew people in the command center, but anybody who could walked outside to view the launch. Aside from all the excitement of the event, the rocket launch was quite unlike anything we had experienced before, that is unless you were present for some of the prior Apollo test launches.

When you watch the countdown, you will note that the count goes— ten, nine, ignition, seven, six…At the eight second mark the rocket begins to fire and it is held in place on the launch pad while all of the main engines build up as much power as they can produce. For those eight seconds the rocket, the thrustors, and the vehicle are all right there in front of you, pounding their energy into the ground. The ground truly shakes. At zero, three giant clamps release the rocket and it starts to fight its way out of the gravity well. The rocket moves very slowly at first, just creeping off the pad and turning a little bit towards the Atlantic Ocean. Minute by minute it rises, but the sound of the rocket remains because sound travels somewhat slower than light. All the while, the rocket continues to get smaller and smaller in the sky.

For the Apollo launch, the crowd had been pretty much screaming, “go, go, go” during the countdown, the rocket separating from the launch pad, and lift off. Only after liftoff did we start to return to our senses and realize how far up and out the rocket with its crew have gone. By about that time the vehicle was traveling around 300 miles per minute (or five miles every second), which is roughly the escape velocity for leaving earth.

That was 50 years ago, and I surely do remember it.

Can you tell me more about what you remember about the day Apollo landed on the moon? What stands out most to you about that day?

The moon landing occurred three days after the launch, and was obviously viewable only by television. The general public and much of the staff did not have much information about what we would see when the Lunar Excursion Module (LEM) landed and the astronauts exited to walk on the moon. I believe the agency did not wish to create expectations that might not be met, nor did they want to release visuals of something going dramatically wrong. But NASA was very savvy about public information and affairs. A camera was deployed on one of the struts which supported the LEM and had a view of the ladder down to the surface and the ground beneath it. That was a surprise to many and immediately drew everyone into the closest television as though they were a participant.

After the launch, there was not much happening at Cape Canaveral, Florida and the Manned Spaceflight Center in Houston – now known as the Lyndon B. Johnson Space Center – had mission control. My three friends and I had driven to Cape Canaveral for the launch, and were halfway back to Washington, D.C. when we stopped to get hotel rooms with TVs to watch the landing. It was very exciting, but it was not a crowd centered event.

Where were you at NASA when President John F. Kennedy announced that he would like to send a team to the moon? If so, how would describe the mission from an idea to actuality?

I joined NASA in 1966. I was still in school when President Kennedy announced the moon mission in May 1961. The president’s announcement was very bold. The concept required the invention of materials and devices that did not exist at that time. For example, the pumps that pull the rocket fuel elements of oxygen and kerosene which are cryogenic – which is another word for super cold – from their tanks and inject them into the rocket nozzle could be designed by engineers, but there were no suitable metals available for production. If the engineers used the metals available to them at the pressures and temperatures required for space flight, the fuels that powered the rocket would be able to squeeze through the spaces between the molecules of metals.

Therefore, NASA moved immediately to fund research in the industry and at universities to discover or invent what materials and programs they were going to need in order to accomplish the president’s goal. In the area of metallurgy there were only three universities in the U.S. with such programs in their science department. Within three years there were more than twenty. Those programs produced the innovations NASA needed, but, as NASA loves to point out, the programs also produced thousands of other innovations that have contributed vastly to modern living.

As a side note, I learned, and this continues to be the case, that many of the people who joined NASA or its broad efforts in academia, industry, and the agency are readers of science fiction. I certainly was from high school onward. Those early writers really prepared a large cadre of people to believe they could do something which was probably quite unreasonable, but instead those working on the Apollo mission expected that it could be done and in such a short period of time.

Living in the Washington, D.C. area, you have access to a wide variety of space and air flight museums and exhibits, including ones specifically designed around this celebration. Which are your favorites and which would you recommend that people visit?

What sparked your interest in practicing law?

When I started my studies at Creighton University in Nebraska, I knew I wanted to contribute in an area I was passionate about, but the problem is it couldn’t be medically related since I could not stand the sight of blood. However, when I discovered how many interesting areas of law I could get involved in, I knew it would be a good fit.

You went from working science and technology law to real estate/property and trust and estates law. What led you to make this transition?

What advice would you give to individuals considering a career as an attorney?

Someone considering a legal practice for a career should avail themselves of the opportunity to visit some law offices and talk to young attorneys. If you love doing what they do, it is not so much like work.

If someone were to ask me what college courses were most valuable for a legal career, my answer after more the 50 years as an attorney, continues to be English, because it is the tool of your trade.