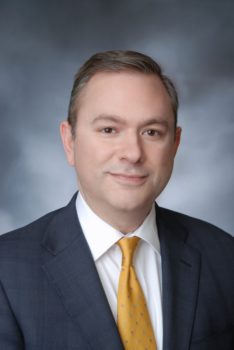 Director
As a Director in the General Litigation & Trial and the Real Estate Practice Groups, Chris helps his clients by recognizing risk and liability in their businesses.

Chris represents closely held companies and small business owners in a cross-section of industries in an array of disputes in the federal and state courts in the Washington Metropolitan Area. He concentrates his litigation practice on complex commercial and business disputes and real estate/construction matters. As an experienced problem-solver for his clients, Chris identifies areas of potential liability and helps manage his client’s exposure to risks and to improve their business.

Chris is a frequent lecturer, most recently teaching a multi-day course on Law and Risk Management for a regional real estate developer with a portfolio in excess of $1.5B. Chris presently serves on the Regulations/Rules/Board Procedures Committee of the District of Columbia Bar, having recently served as the Chair of the Judicial Evaluation Committee. Since 2009, he has served on the Fairfax County Industrial Development Authority. Chris has an active pro bono practice in which he focuses on assisting active members of the armed forces and disabled veterans.

Chris attended Pace University School of Law and served on the staff of the “Environmental Law Review.” He graduated with a Bachelor of Arts from the University of Maryland in 1995.

United States District Courts: District of Columbia, District of Maryland, and the Eastern and Western Districts of Virginia

The District of Columbia Bar, Chair of the Judicial Evaluation Committee