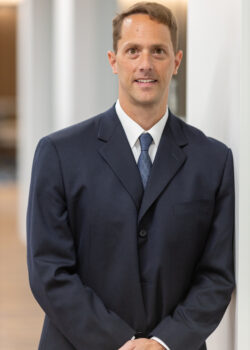 Chris is a 2007 graduate of the National Institute of Trial Advocacy’s (NITA) National Session in Louisville, Colorado. Founded in 1971, NITA is recognized as the premier trial advocacy training institute for practicing attorneys.  In 2022, Chris was elected as a Fellow for the American College of Coverage and Extra-Contractual Counsel, which is composed of preeminent insurance coverage counsel in the United States and Canada.

Chris received a Bachelor of Arts in political science from Boston College in 1997. During his junior year, Chris spent a semester in London, where he worked as a legislative aide to a member of the British House of Commons and attended classes at London Guildhall University.