These provisions are generally a product of levelheaded and well-intentioned efforts by firms to protect themselves from undue restrictions on future legal work adverse to their large sophisticated clients that would otherwise result from the per se rules on imputation. See Model Rule 1.10.

But, notwithstanding considerable legal support and sound policy reasons for such provisions, in practice they have something of a Rodney Dangerfield problem.

The reality is that courts (and disciplinary counsel in many jurisdictions) are uncomfortable with enforcing them against a client who claims to have been betrayed by an adverse representation. The skepticism and resistance with which many courts have treated such provisions, at least when they are not tailored to specific aspects of the client’s operations or particular needs of the law firm, calls into question their utility.

The real problem is that, worse than merely being ineffectual, the use of open-ended[1] advance waivers may create a false sense of security resulting in the firm going forward with new matters that it would otherwise forebear from taking on. This practice could ultimately heighten rather than mitigate a firm’s potential exposure to risks, regardless of its good faith and reasonable intentions.

Law firm managers would be better served by adopting a strategy that recognizes this unpleasant reality by fashioning more targeted advance waivers that reflect a candid discussion with prospective clients, identifying particular matters of concern for each.

The Background on Advance Waivers

The use of advance waivers of conflicts of interests was first widely recognized in ABA Formal Ethics Op. 93-372, issued in 1993.

That opinion acknowledged the realities of a modern environment in which some law firms engage in various specialized areas of law in different regions of the country while their large corporate clients retain a variety of law firms to assist them with their own specialized needs in different locations. The general concept has been that law firms should not be prohibited from negotiating agreements with sophisticated clients whereby the law firm could seek advance protection from imputed conflicts of interest that might arise on future matters wholly unrelated to their legal work for that client.

Part of the premise for this view is that large organization clients that are experienced purchasers of legal services, and that may have the benefit of the advice of in-house counsel, have a level of sophistication as well as bargaining leverage that enables them to engage in arms-length negotiations with law firms as equals. Under this view, these circumstances warrant a relaxation of the traditional orthodoxies with which the lawyerclient relationship are treated. See District of Columbia Ethics Op. 309, 17 Law. Man. Prof. Conduct 716 (2001).

In Opinion 05-436, the ABA Standing Committee on Ethics and Professional Responsibility concluded that Model Rule 1.7 ‘‘permits effective informed consent to a wider range of future conflicts than would have been possible under the Model Rules prior to their amendment.’’

While Model Rule 1.7 still makes no express reference to advance waivers, Comment [22], titled ‘‘Consent to Future Conflict,’’ does. That comment provides guidance as to how the ‘‘informed consent’’ requirement can be met for such waivers. The Comment states, in part:

The more comprehensive the explanation of the types of future representations that might arise and the actual and reasonably foreseeable adverse consequences of those representations, the greater the likelihood that the client will have the requisite understanding. Thus, if the client agrees to consent to a particular type of conflict with which the client is already familiar, then the consent ordinarily will be effective with regard to that type of conflict. If the consent is general and open-ended, then the consent will ordinarily be ineffective, because it is not reasonably likely that the client will have understood the material risks involved. On the other hand, if the client is an experienced user of the legal services involved and is reasonably informed regarding the risk that a conflict may arise, such consent is more likely to be effective, particularly if, e.g., the client is independently represented by other counsel in giving consent and the consent is limited to future conflicts unrelated to the subject of the representation. (Emphasis added.)

But these guidelines have not ended the uncertainties as to whether particular advance waivers will be upheld if later challenged by a client. Specifically, for many courts it has remained doubtful whether the participation of the client’s in-house counsel in reaching the agreement, coupled with the sole limitation that it does not encompass substantially related representations, will be deemed sufficient to enforce the waiver.

THE SEARCH FOR KEYS TO ENFORCEABILITY of advance waivers

The above language of Comment [22] appears to support the idea that the participation of in-house counsel in an unambiguously worded advance waiver that excludes substantially related representations should be decisive in upholding its validity, even if it is otherwise open-ended. See Lauren Nicole Morgan, Finding Their Niche: Advance Conflict Waivers Facilitate Industry- Based Lawyering, 21 Geo. J. Legal Ethics 963, 982-83 (2008), stating: ‘‘Thus, open-ended or ‘blanket’ waivers signed by sophisticated clients are likely to be effective, because less specificity is needed to ensure that these experienced clients have made an informed decision.’’

See also Restatement (Third) of the Law Governing Lawyers (2000) § 122 cmt. d, stating: ‘‘A client’s open ended agreement to consent to all conflicts normally should be ineffective unless the client possesses sophistication in the matter and has had the opportunity to receive independent legal advice about the consent.’’ (Emphasis added.)[2]

Firms should use the sophistication of the client to engage in a candid and freewheeling discussion of the types of conflicts that should be overlooked in the future and jointly craft a customized waiver.

Yet, other courts have declined to uphold advance waivers when the waiver is broad and unrestricted, even where sophisticated clients who were represented by in-house counsel signed them.

In Visa, the law firm recognized from the outset a potential problem in taking on First Data as a new client due to its existing legal work for Visa, who was a longstanding client of the firm. While there were no current conflicts between the two companies, the firm rightly anticipated that ‘‘there was a significant risk of future adversity [between them] because Visa and First Data were major competitors in the processing side of the credit card business.’’ Id. at 1106.

Thus, the firm conditioned its acceptance of First Data as a new client on its acceptance of an advance waiver for future matters it might undertake for its existing client, Visa, that would be adverse to First Data.[4] The waiver included the firm’s commitment that none of the firm lawyers handling First Data’s work would be involved in such matters and that an ethical screen would be erected. Visa stands as an example of a targeted waiver.

In a recent and very helpful article in the ABA/BNA Lawyers’ Manual on Professional Conduct, there was a discussion of recent authorities on advance waivers, and, more importantly, practical suggestions for clauses to include that would enhance the enforceability of such provisions. See Peter Jarvis, Allison Martin Rhodes & Calon Russell, Clearly Enforceable Future Conflicts Waivers, 30 Law. Man. Prof. Conduct 692 (Oct. 22, 2014).

Since the publication of that article, two district court decisions in California and one magistrate’s recommendation in Pennsylvania were issued, all rejecting advance waivers even though executed by highly sophisticated clients who were represented by counsel.

While recognizing that ‘‘[b]road advance waivers are a logical outgrowth of large firms and the spiderwebs of affiliates, subsidiaries and parents they represent,’’ the court stated that ‘‘[p]ronouncing the waiver here enforceable… would promote broad, static agreements over timely and forthright discussions of conflicts and their effects…’’ Id.

The breadth and temporal scope of [the firm’s] advanced waiver is open-ended. It purports to waive conflicts in any matter not substantially related indefinitely. The waiver also lacks specificity. It does not identify a potentially ad- verse client, the types of potential conflicts, or the nature of the representative matters. 2015 BL 45965 at *8.

The courts in both Lennar Mare Island and Western Sugar referred favorably to the tailored waiver in Visa.[5]

Finally, in Mylan, Inc. v. Kirkland & Ellis LLP, 2015 BL 186120, 31 Law. Man. Prof. Conduct 340 (W.D. Pa. June 9, 2015), currently under review by the district court, a federal magistrate similarly recommended that an advance waiver agreed to by a lawyer-assisted client should not be enforced.

advance waivers can lead to a FALSE SENSE OF SECURITY

The central point of this article is to suggest that the use of open-ended advanced waivers, which understandably are an item on the checklist for inclusion by diligent risk managers, can, when coupled with a reliance on their effectiveness, heighten rather than lessen the firm’s potential risks.

The danger is that firms will take on representations in reliance on such waivers that they would not other- wise do. In Lennar Mare Island, the court noted such reliance, stating that a lawyer for the law firm believed that the representation ‘‘would create no conflict of interest due to a prospective waiver of conflicts.’’ 2015 BL 98616 at *4. (Emphasis added.)

In such instances, even if no other remedies are imposed, the firms may incur the costs of litigating the is- sue as well as suffering the indignity of a disqualification order, notwithstanding their good intentions.

I think it is a better strategy for law firms to add a step to the process before submitting advance waivers to prospective clients. This step would be to explore with prospective clients the particular types of conflicts that are both foreseeable and that the firm believes would most unduly restrict its practice.

Ideally, as in Visa, this should include the identification of particular existing firm clients who are likely to be adverse to the prospective client. Firms should use the sophistication of the client to engage in a candid and freewheeling discussion of the types of conflicts that should be overlooked in the future and jointly craft a customized waiver.

It’s hard work, but such efforts at the outset of a representation, along with use of the provisions suggested in the Jarvis article, are a sound investment.

[1] I take it as a given that an advance waiver must exclude future representations that are the same or substantially related to the matter that the firm is undertaking for the client. In using the phrase ‘‘open-ended’’ in this article, I do not mean to suggest the absence of such a requisite limitation, but rather refer to waivers that are not tailored to particular existing firm clients or specific types of matters for which the waiver will apply.

[2] Cf. Richard W. Painter, Advance Waiver of Conflicts, 13 Geo. J. Legal Ethics 289, 312 (2000), arguing that the participation of independent counsel for a client in agreeing to an advance waiver would provide a good bright-line test for enforceability. Painter stated: ‘‘Courts thus should generally enforce a waiver if it is unambiguous and the client is independently represented by another lawyer, including in-house counsel, at the time the waiver is given.’’

[3] In Cohen v. Radio-Electronics Officers Union, 679 A.2d 1188, 1186 (N.J. 1996), the court stated: ‘‘Agreements between attorneys and clients concerning the client-lawyer relationship generally are enforceable, provided the agreements satisfy both the general requirements for contracts and the special requirements of professional ethics.’’

[4] The waiver included the statement: ‘‘Moreover, as we discussed, we are not aware of any current adversity between Visa and First Data. Given the nature of our relationship with Visa, however, we discussed the need for the firm to preserve its ability to represent Visa on matters which may arise in the future including matters adverse to First Data, provided that we would only undertake such representation of Visa under circumstances in which we do not possess confidential information of yours relating to the transaction…’’ Visa, 241 F. Supp. 2d at 1107.

[5] While both cases relied on the California Rules of Professional Conduct, which are not based on the ABA Model Rules and so can be readily distinguished in other jurisdictions on those grounds, these cases reflect the continuing general judicial discomfort with such provisions. 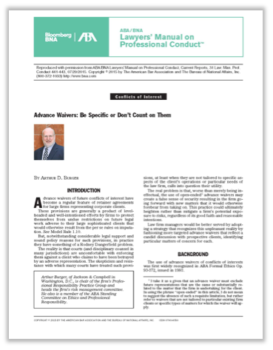